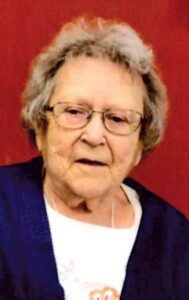 Leona was born September 24, 1934 to Adolph and Pauline Morlock. She was raised on a farm near Pettibone, ND and graduated from Pettibone School. Leona married Milton Hust on February 26, 1955 in Tappen, ND at United Methodist Church.

Visitation will be one hour before the service. Funeral service will be 1:00 PM, Wednesday, December 21, 2022 at United Methodist Church, Tappen, ND with Pastor Brenda Goodman officiating. Interment will be in the spring at Fisher Cemetery, Tappen, ND. A reception will follow services at Tappen City Hall.

Eddy Funeral Home is in charge of arrangements.

This site uses Akismet to reduce spam. Learn how your comment data is processed.